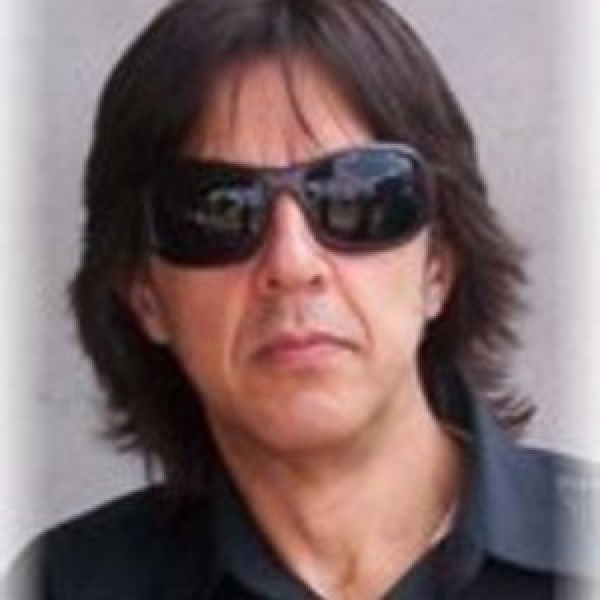 Ed Primo is a Brazilian Artist living and working in Sao Paulo, he was assistant to sculptor and artist Yutaka Toyota.

Worked on the cover of the album "Rio Claro" by the Australian band Jarrah Thompson. Made the cover of the CD of the Brazilian singer and musician residing in Shanghai - Tom Vitti. He painted a Rhino for the Rinomania project for 60 years of Duratex in São Paulo.

His stay in Orbetello-Italy for paintings produced on T-shirts, sarongs and dresses and contacts with art galleries. Participation in the Jarrah Thompson Band Tour in Berlin to promote the CD "Rio Claro" and contacts with art galleries. Painted 20 canvases and 2 murals on the "Rio Claro" Tour by the Australian Band Jarrah Thompson through 6 states and 22 Brazilian cities.

Participation in the project “A book about death” conceived by the American artist Matthew Rose at the Emily Harvey Foundation Gallery at MUBE-SP. Quoted in the book "Tecendo o Saber" by the Roberto Marinho Foundation. Canvas painting at the Carrano Prize for Anti-asylum and Human Rights-SP. Painting of 1 mural in the Trocaoslixos Movement at Cultura in Vila-Osasco. Painting of 1 mural at Asip- Osasco. Participation in the craft fair in Boa Viagem - Recife and in the craft fair in Camarajibe.

In the Artists own words....

Ed Primo, the second son of five brothers, was born to an Adventist family in 1960 in the city of Itararé, in the interior of the state of São Paulo.-Son of salesman Plácido Primo and housewife Maria Lopes, soon realized that he would not be an ordinary living being.

He was born crying!I already knew I wouldn't have an easy life.-Art appeared on cards and gouaches at the children's school; black and colored pencils in the primary.-The influences of the drawings and paintings of the uncles, the comic books, the colors of the blue and red papers that covered the notebooks and in the making of parrots (kites) the colors of the flowers, animals and fruits were striking.

Later, he would be influenced by the color combinations of the cake toppings made by his mother Maria.-The stories of your grandfather Ponciano were important in your art, as well as the Antuniano theater of your brother Jefferson Lopes.-The drawing teacher said in 1971:"You combine colors well."-When moving to São Paulo, he discovers the gray of pollution, drizzle and alcohol and drug nights.

In Europe, he compared the old smells of art and the modern smells of Brazil.-In Portugal, he noticed the breeze of the Algarve sea and the golden ocher cliffs live and in color.-In Lisbon the multiplicity of yellows and beiges of the buildings and the solar reflections in the Tagus.-In London you felt the cool autumn wind, the education of the people, the security of a democratic city and the smell of lead gray in London subway stations.-In Liverpool he smelled the Beatles and in Southport the smell of the sea and strong beer.-Remember the smells of Spain, Italy and Germany.-In North Africa the warmth and receptivity of the people of Tangiers, Casablanca and Rabat.

He believes that the most rational and evolved artists will emerge in universal Brazil and the world's breadbasket.-He always painted because he had the need to express his revolt and his pain, but also the search for a better life, financially and socially among all.-In these 40 years of art he produced paintings on canvas, wood, cardboard, bamboo, door, wall, car, t-shirt, jacket and lampposts.

As an assistant to Master Yutaka Toyota he had the opportunity and the honor to learn.-He believes that at 60 he is in his best artistic and personal phase.-The artist intends not to sell his original works, as he intends to do a retrospective soon.-The choice of art lovers of the artist are the posters that will be marketed in London by the artist and dealer Colin Taylor. 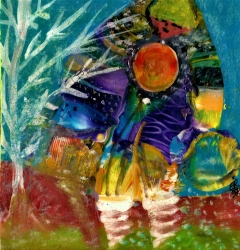 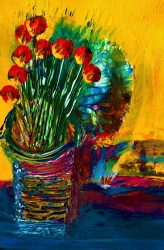 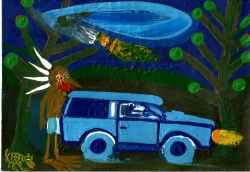 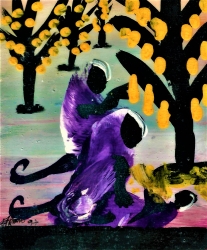 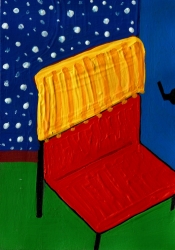 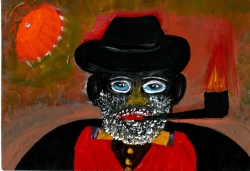