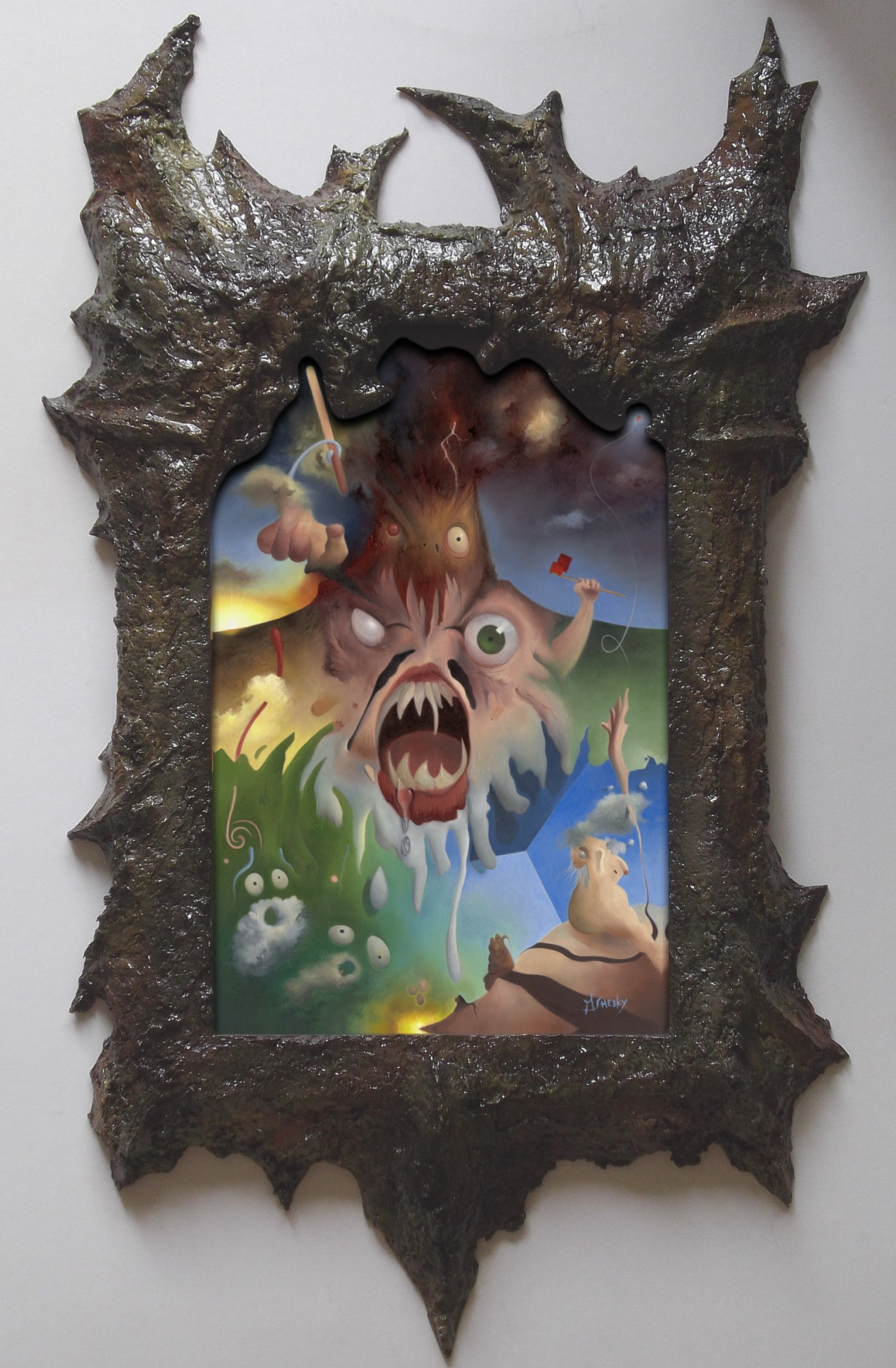 Previous
View all
Next

A painting inspired by a seemingly motiveless violent outburst directed at me. The aggressor seemed to be eternally filled with anger, he felt the need to manipulate and control people due to his paranoia and, beneath this I surmised, fear of attack. As such, this is a psychoanalytic painting, a form of 'projected surrealism', if you will. An exploding volcano is an obvious metaphor for anger, but underneath, I wanted to show the fears and weaknesses that grow, each covered with overlapping layers of psychological rock, preventing their escape through communication, and building up the pressure that is released intermittently in violent bursts of communication. The volcano is holding a stick, a weapon to hit people with but also a phallic reference, for a form of comfort. It is pointing to redirect its negativity on others. The red flag is a reference to a football team rather than socialism or communism. Below, the face collapses into fear and isolation, impotence, which here means a lack of love felt or given. A road, which represent the passage of time, the long road of life, turns into a hand reaching upwards on the right, grasping for a thread, the cord of a balloon which represents childhood, and the balloon is love, tiny and forever out of reach. I developed this painting in unison with its complex, sculpted frame, a surround made from wood, plaster and epoxy resin that looks like rough rock. I wanted to make an image that seemed to burst out of solid rock in the same way as magma from a volcano, thus reinforcing the theme, creating themes within themes. This is my compositional method; to choose a theme and re-represent it in different ways, adding variety to unity, like a musical theme in a classical piece of music. For me, it is structures like this that form the foundation of great art. It is this structural, thematic unity that I consider new to visual art, and this is my pursuit and focus of exploration as an artist.

Read more about the Artist

Galleria Balmain's global Artists and their Art connect with collectors and buyers all around the world.

We take a bespoke approach to shipping the various sizes individual and unique art is, mindful of the cost to our customers. The 3 simple steps below show bow to add shipping costs and purchase your artwork.

After you have made the decision to buy art from us please click the Payment and shipping 'Enquire Now' button for the piece of Art. We receive your enquiry and calculate the shipping cost then contact you with the total price, shipping and artwork.

We contact our Artist and arrange packing, shipping and delivery direct to your delivery address.

Once the shipping costs are agreed we will send you a secure payment link for the total price *, shipping and artwork. When we have received your payment, delivery is made directly to your chosen address.

NB * Please note the above ‘total price’ does not include any local taxes you might be subject to as the purchaser and any tax laws of your country.