Tanja Meier’s work (* 1968, Germany, based in the Netherlands) is often perceived as dark and melancholic. But it's not only about sorrow and grief; she delves deeper. In her artwork, Tanja invites the viewer to go on fearlessly, to cross borders and to not avoid the depths. Darkness is part of life - and more expressive for the artist than the cheerful side.

Meier paints people as a portrait or figure in an empty, almost surreal space - often accompanied by ravens or crows - and sometimes only the space. In her pictures she brings together all the fragments of thoughts, feelings, sensations and memories that arise simultaneously and transforms them into a sometimes disturbing, but always moving composition - extremely personal and at the same time universal.

In 2001, the introverted natural scientist and soon-to-be programmer, Tanja Meier set out to discover the Netherlands. A chance encounter with art in the museums of her new home incited a powerful inner urge to break free: Using visual art in a language of her own design, she sought to create something that represented everything incomprehensible in her life that was difficult to describe rationally.

Inspired by artists such as Vincent van Gogh, Edvard Munch and Anselm Kiefer and aroused by musicians such as the British songwriter Anne Clark, Tanja Meier has learned techniques through self-study as well as numerous courses and workshops in order to be able to give shape to her ideas on canvas or paper.

She has participated in Paul Tieke's master class in Almelo for a number of years, which, in addition to the artistic exchange, offers her the opportunity to paint live models. In addition to the practical training, she has deepened her theoretical knowledge through studies in art history at the Vrije Academie. 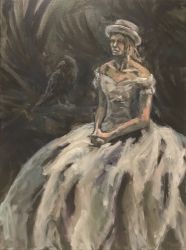 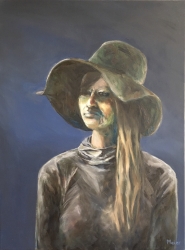 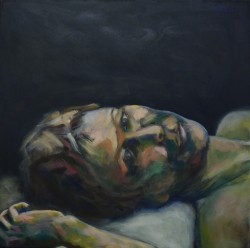