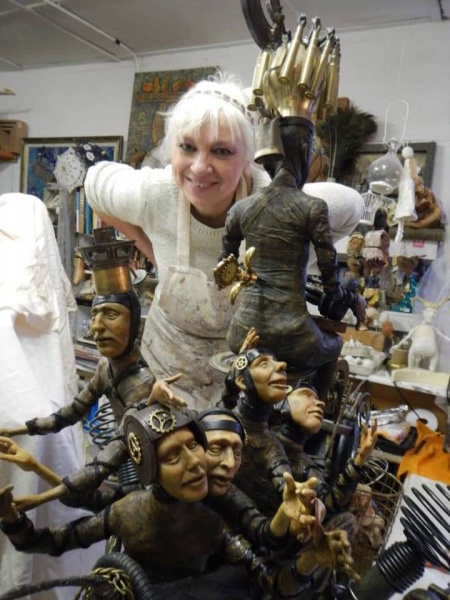 My story - from Cinderella to a frozen Moscow scarecrow to a Norwich car boot sale!

“The first figure I created was when I worked as a costume designer for Moscow theatres. A director asked me to prepare some illustrations of the costume for Cinderella. To impress him I made a figure dressed in the costume - he was so impressed that, when the actress who was playing the part of Cinderella fell ill, he gave me the part! It was at that point I became ‘hooked’ on designing, making and dressing figures. This lead to my first commercial venture - to make and try and sell classic Russian cloth dolls. In those Soviet times there was restricted access to other countries and of course no Internet, so I was forced to try and sell them at a Moscow open air tourist market. I remember standing for hours in the freezing cold with my arms out stretched holding my dolls; I laugh now at the thought that I must have looked like a frozen scarecrow.

Slowly I progressed and combined my costume design talent with my new found love of sculpting – I actually found I became memorised when shaping a piece of clay into a face. In fact unknowingly I was creating a genre called ‘Art Dolls’ that is extremely popular (and highly valued) in Germany, the USA and Russia. However on relocating to the UK I soon learnt that the attitude of the British public to ‘Art Dolls’ was totally the opposite; people referred to them as ‘weird’ and ‘spooky’. This was quite demoralising but I had no alternative but to sculpt classical figures.

However a positive UK experiences, as they did not exist in Moscow, was to visit car boot sales – to me they were an Aladdin’s Cave. I would randomly buy what appeared to be useless junk – pieces of metal, nuts and bolts etc. One day, with no clear vision of what I would create, I incorporated them with a sculpture – this started me on a fascinating journey of creating large installations. However as they grew in size and complexity my elderly husband explained that they were too large for the average UK home, he added, and I think the real reason, that he had to carry them to our car and at exhibitions he said it nearly killed him! I promised I would make them smaller and lighter than the one below that is nearly one meter high!

However I failed to downsize; as in 2018 The East Anglia Art Fund was having an exhibition within Norwich castle entitled ‘Inheritance’ and I was asked to produce a relevant piece. This prompted me to embark on my most challenging, complex and time consuming project. Because 2018 was the 100th anniversary of the execution of the Russian royal family - The Tsar Nicholas II, the Tsarina Alexandra and their five children I just had to produce something, through my Russian eyes, brilliant,

memorable and of course related to ‘Inheritance’. I found an old photograph of the family and started my search for antique lace, other materials and jewellery – this was the end result.

But now it was time to move on and ’get smaller’ - which is an appropriate link to my next project.

As a child I was fascinated by Lewis Carroll’s Alice books; particularly the wonderful illustrations of the main characters so ‘My Alice Collection’ became my next and very successful project. (It also kept my husband happy!)

Initially I was interested in creating familiar scenes from the book such as the famous ‘Mad Hatter’s Tea Party’. So I was drawn back to making an installation which once again resulted in early morning Sunday visits to car boot sales to find the correct sized tea pot, cups table and chairs – this was the result.

This piece was so popular that I received many commissions for the individual characters including the ‘Cheshire cat’ that was shipped to a lady in Lapland!

One of the additional benefits of relocating to Norwich is that it has long association with the arts; with the Norwich School of Painters being founded in 1803 by John Crome and Robert Ladbrooke. Today there is the Norwich University of the Arts many galleries, creative events and exhibitions. However when I arrived I felt quite lost and isolated until I met a fellow Russian artist Gennadiy Ivanov whose guidance, support and introductions proved invaluable. I quickly became a respected member of the artist community and was invited to exhibit in galleries and exhibition both locally and in London. At one of the exhibitions I was lucky enough to meet two ladies who owned the gallery ‘Fire and Flux Ceramics’. They suggested I should try creating figures in ceramic. So a new chapter in my life started but, as I had no experience of working with materials that needed firing, I had no idea of the finer points of the process and thus initially there were many disasters including my work exploding in their kiln! But eventually I succeeded and the results have been well received at local and London exhibitions. Unfortunately with the current Covid-19 crisis exhibitions are only happy memories. But life goes on and opens new doors with the recent commission (on   the right) being a poignant reminder of 2020.

Understandably this story has omitted many wonderful moments and some hilarious, and potentially dangerous, situations including…

..…my husband being arrested by armed soldiers at Moscow’s

Sheremetyevo airport for trying to take ‘Semtex’ onto a plane (7 packs of my air dried clay!)

.....how I smuggled ‘coffins’ full of my very large sculptures through customs at Frankfurt airport en route to my exhibition in Luxembourg

..…being selected in 2020 and subsequently filmed at my studio for a new Sky TV art series

and the wonderful experience of being invited by the British ambassador - Sir Roderic Lyne - to give a private exhibition at his Moscow residence; a beautiful palace situated on the opposite side of the Moskva river to the Kremlin. 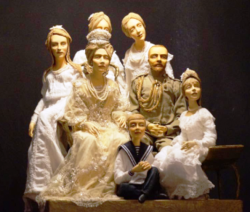