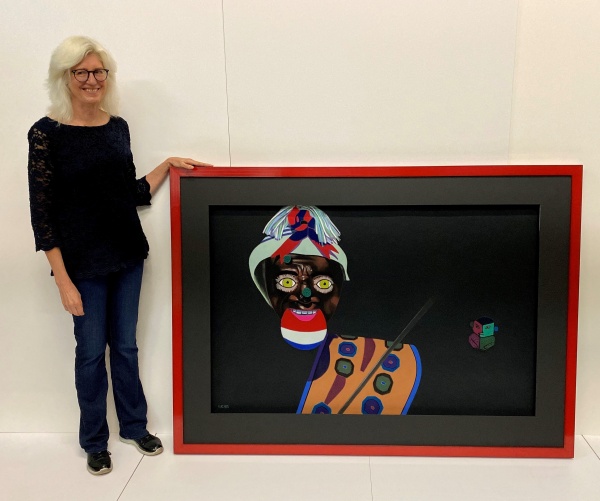 between residences in New York City and Alexandria, VA. She is best known for her

pastel-on-sandpaper paintings, her eBook, “From Pilot to Painter,” and her popular blog, “Barbara Rachko’s Colored Dust,” which now has passing 54,000 subscribers.

Barbara has led an extraordinary, inspiring life. She learned to fly at the age of 25 and became a commercial pilot and Boeing-727 flight engineer before joining the Navy. As a Naval officer she spent many years working at the Pentagon and retired as a Commander.

On 9/11 her husband, Dr. Bryan C. Jack, was tragically killed on the plane that hit the Pentagon.

Barbara uses her large collection of Mexican and Guatemalan folk art masks, carved wooden animals, papier mâché figures, and toys – to create one-of-a-kind pastel-on-sandpaper paintings that combine reality and fantasy and depict personal narratives. In 2017 she began work on a series called, “Bolivianos,” based on her stunning photographs of a mask exhibition she visited in La Paz.  Her paintings are striking and powerful.  For more than thirty-three years, Barbara has been “Revolutionizing Pastel as Fine Art.”

Arts writer Ann Landi writes, “Barbara Rachko’s antecedents are not in the folk art traditions of the cultures she studies and embraces, but rather in the sophisticated strategies of Henry Matisse (who was a master at mixing patterns) and Edgar Degas (who exploited the power of oblique angles and cropped figures).”

Barbara exhibits nationally and internationally and has won many awards during her more than three decades as a professional artist. 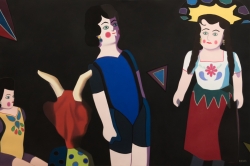 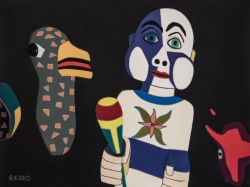 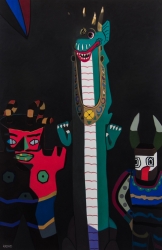 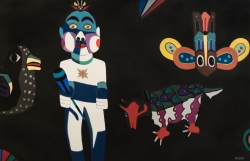 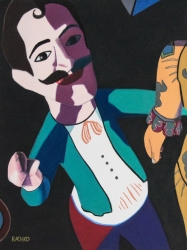