Born in Kazan (Tatarstan) in 1962, Rinat Baibekov comes from a family of painters. He began sketching and painting at a very young age attending full time Art School alongside his primary schooling.
After completing high school, Rinat was accepted to the Kazan Art College. This in turn was followed by the Kharkov Academy of Fine Art and Design where he majored in Public Art.
After living and working as an artist in (Leningrad) St. Petersburg until 1990, Rinat moved to Toronto, Canada.
In 1997 Rinat once again crossed the ocean this time to the United Kingdom where he eventually settled.
At present time Rinat lives, works and exhibiting in the United Kingdom.

My dialogue with the world is a visual one. The universe is already created for us with all its beauty and wonders. As a visual artist I want to reveal true character of the soul and interpret the inter-relationships between all that is already there yet through my eyes. Humans and animals, plants and music, fairytales and which hiding the history and wisdom of ancient world, philosophy, concealed symbols and forgotten songs are all inter-relationships I illustrate in my work.

Utilising knowledge and experience, one can masterfully implement the rules of composition, proportion, colour, tone, different techniques, effects, style to be considered a professional artist, yet in the end remain but only a craftsman, of which there are many. To become a Creator - Artist in the bigger sense one must reach for something grander, beautiful new, something I am trying to do to this day. My father, also an artist, taught me that if you do not have a teacher, go to Mother Nature.

On top of the rock a snail is awoken

It opens the delicate eyes

fascinating work has achieved international renown and prized, and over the last 20 years has been received with enthusiasm in exhibitions in: the United Kingdom, France, Italy, Russia, Germany, Switzerland, Canada, and the USA.

Rinat has painting in his veins, as he is a scion of a well-known family of artists. He was born in Kazan, the capital of Tatarstan in the heart of Russia - and no doubt the fateful and dramatic nature of Rinat's work reflects his inheritance from the turbulent history of that ancient land. His formative years were spent in the fairy-tale world of the primordial woodland shores of the Volga. Elements of the mysticism of the river and the forest experienced as a child are strongly present in his mature work. He remembers his father telling him that Mother Nature, as revealed in the wildlife of the forest, is the best and most honest teacher, though her wisdom can be lost to those who are immersed in the illusional world of urban "progress" and Soviet atheism. With his artistic sensibilities and family background it was natural that he should study art, and he attended specialist art institutes in Russia, including the Kazan College of Fine Art and the Kharkov Academy of Fine Art and Design. Having spent several years in Canada, Rinat is now resident in Great Britain.

Rinat uses a variety of media, including watercolor, drawing materials, oils, acrylics and fresco, and he always demonstrates an incredible level of skill. It is perhaps unusual in an artist to find the combination of such an amazing quality of finish with such expressive and energized motifs. Themes in his paintings range from religious to erotic, with elements of distortion and metamorphosis depicted in his unique hyper-real style. His work sweeps the viewer into an otherworldly realm where the unreal and the quotidian become indistinguishable and intensely present. Elements of fairy-tale and folk legend underlie his work, where nothing is as it seems and anything can happen. His favorite character is the Jester – the age-old figure of the Jester-Bard, the singer of Truth. The world may be full of vanity and bustle, and inhabited by senseless, proud, indifferent people, but the Jester is the one who can reveal the truth through his conundrums. Although he hides his tears, like a snail in a shell, he makes laughter his philosophy, and through his creativity he can soar through the skies like a bird on the wing. No day that includes laughter is wasted.

It has been said that his paintings combine a Blake-like vision with elements of Expressionism and Surrealism. His technique certainly does recall that of Dali, but Rinat's work is distinctive and unique, owing no overwhelming debt of influence to any one school or individual. His work achieves its powerful effect by a combination of a wild, free-ranging imagination expressed through the means of distortion, exaggeration, primitivism, and fantasy. For instance, the painting called Puppy brings to mind primordial times and antediluvian animals, which belie the innocence of the painting's name. The animal in the picture is hardly a puppy but rather a feral beast whose eyes and teeth glint with either fear or the taste of the hunt, in an unearthly-colored fantasy landscape which is not really a landscape at all. Baibekov's paintings can be both beautiful and unsettling. His exhibitions always excite controversy and opinion, and we have no doubt that this exhibition will further increase his reputation with collectors and the gallery-going public. 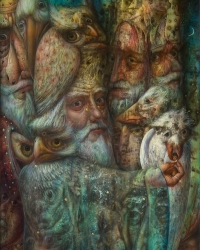 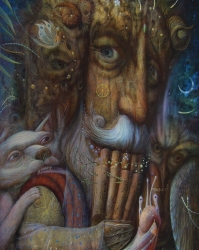 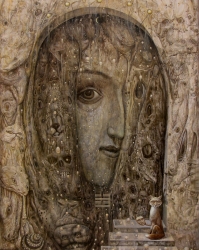 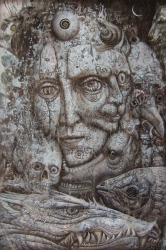 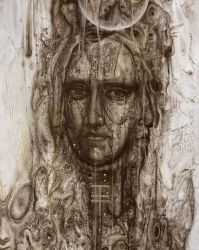 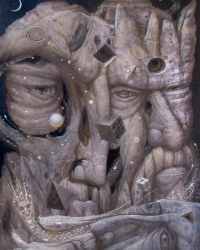